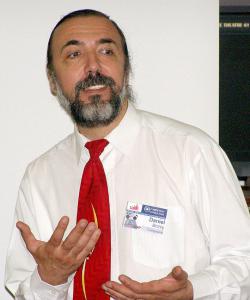 Daniel Bichis learned NLP with Ronald Amsler at NLP Institute Zurich, Switzerland, in 1998-1999. He was certified as NLP Trainer by Richard Bandler in 2000, and continued to learn with Robert Dilts, Judith De Lozier and Stephen Gilligan during the next decade. He had very fruitful contacts and worked together with Karl and Nandana Nielsen (Germany), Julie Hay, Peter Emery and Steven Saunders (UK), Ueli Frischknecht and Megha Baumeler (Switzerland).

Since 2007, he is member of assistant team created by John and Kathleen La Valle for the workshops and trainings presented by Richard Bandler around the world. Therefore, he has the opportunity to be in permanent contact with the latest developments of NLP by one of its co-creators.

In 2011, he was licensed as NLP Master-Trainer by Richard Bandler, being the first East-European to receive this honor.

Daniel is contributing to the development of the 4-th generation of NLP, by a series of models and techniques:

• experiential model of NLP, that deepens and enlarges the communication model used since the '80s,
• Emotional Cycle of Experience®, an extension of Gestalt cycle from action to the whole human experience,
• DGD2 pattern, the simplest way of applying meta-model questions in a coaching context,
• PILE coaching model, which leads to integration of both emotions and thoughts in order to enhance actions,
• 6-attractors, 4-paths model of human development, etc.
He also contributed to a 5-years long effort for obtaining State-recognition for coaching as a profession in Romania and is the co-author of the first official curricula for training of professional coaches in an EU country.
Daniel is highly appreciated by the participants to his trainings and workshops for his:
• extended knowledge of evidence-based information he uses for explaining and exemplifying NLP concepts,
• easiness in using and adapting NLP patterns for a content-free application,
• elegance and presence in both training and coaching settings,
• openness to new ideas and tremendous creativity,
• efficiency in facilitating awareness and change in people interacting with him.